Introduction. I'm not a film camera user, but I'm always intrigued when the question of how many megapixels does a digital camera need before it is "as good as film" is asked. Very often, the discussion seems to devolve into name calling, or subjective claims...either way, nothing gets resolved. In order to avoid further name calling, this page does not attempt to answer that question. Instead, this page presents a comparison between one of the latest digital cameras (Canon D60) which produces a 6 megapixel image, and a high quality scan from a film image. The purpose of this page is to add some illustration to the (typically theoritical) dicussion about film vs digital.

The debate in a nutshell. There have been a lot of attempts to answer this question, most of which are far more scientific than the admittedly crude test on this page. For those who haven't been keeping score at home, here's a very brief summary of the debate so far:

Why it is not just as simple as pixel counting. Some digital enthusiasts have argued for a while now that their images are "better" than film images. Pixel counters have objected, arguing that a digital camera with "only" 3 or 5 megapixels couldn't possibly match film quality.

Norman Koren argues that even though digital cameras don't quite match film in terms of raw pixel count, their images look as good (or better) because "perceived image quality is...a function of both MTF (sharpness) and noise (grain)." And, while the current crop of 6 megapixel digital cameras can produce virtually noise-less images, film, in comparison, is extremely grainy. Koren gives the following example, "Skies in digital camera images with pixels larger than about 6 µm are virtually grainless. That makes a big difference in perceived image quality. Many photographers will perceive images from the current generation of high-end 6 megapixel cameras-- the Canon EOS D60 and the Nikon D100-- to be equal to 35mm. We are there now!"

Comparing apples and oranges. Below are some film vs. digital comparison pictures I took to try and illustrate the debate. Given the different technologies and equipment used to conduct such a test, comparisons such as these are not really "apples to apples". Nonetheless, realizing that I have neither the equipment, patience nor interest to perform a "perfect" test, and understanding that there are certainly areas of this comparison that could be improved, here's a brief test description: 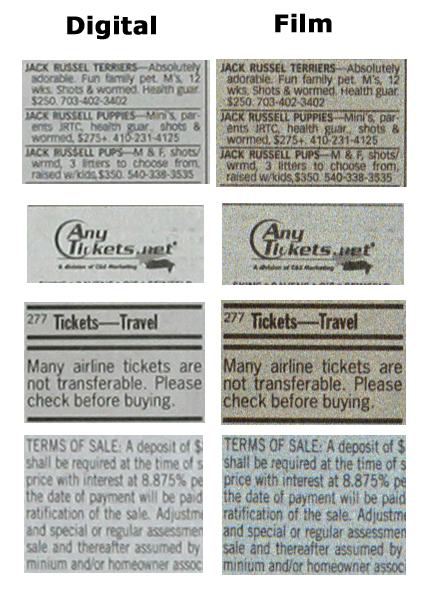 Conclusion. As expected, the film camera appears to capture slightly more detail than the digital camera. Perhaps a higher resolution scan would yield even more detail, although I think this is reasonably close to this film's limit. However, as expected, the film image looks extremely grainy. From my perspective, I prefer the digital image. Even in a 4x6 print, the film grain is visible, while the digital image looks fantastically smooth. An 8x10 print is still small enough that the theoretical resolution advantage of film is invisible, but large enough that the film grain is clearly apparent (to my eyes). As the print size increases, the graininess of the film becomes objectionable long before its technical resolution advantage becomes visible.

Of course, this is subjective, and different people will reach different conclusions. However, it is definitely worth seeing some prints made from digital images before concluding that they can't be "as good as" film-based prints based on resolution numbers alone. Nonetheless, if you don't mind the grain and want the most resolution possible, it still looks like film has the edge.

In many ways, the film vs. digital debate reminds me of the old analog vs. digital audio debate. Analog purists insisted that because digital audio takes discrete samples of a sound source, CDs were not as good as vinyl LP records. But records (and cassettes) are plagued with noise (cracks, pops and hiss) unlike the CDs. The technical debate still continues in some corners, but most people threw away their records a long time ago!

Noise-free 30 megapixel images...Further viewing. One way of getting the best of both worlds (no grain and high resolution) is to stitch digital images together...here are some of my own image galleries using this technique.